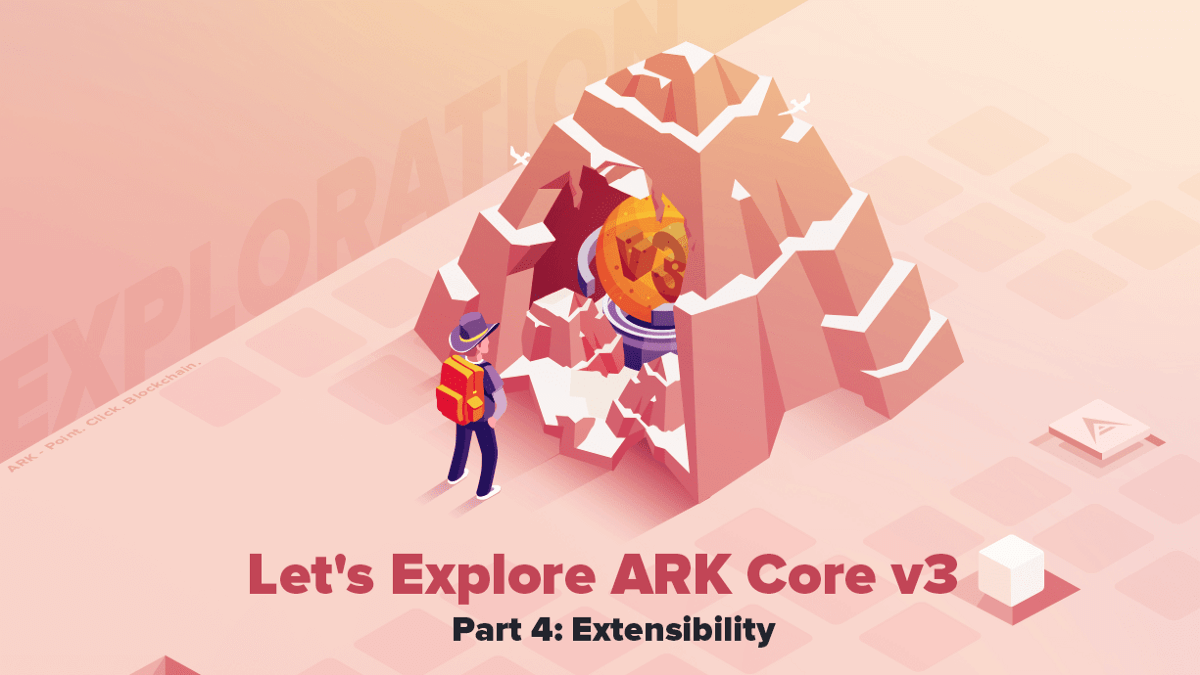 This is part 4 of the Let’s Explore ARK Core series which documents the development of the next major release of ARK Core alongside some tips & tricks on how to get started with contributing and building your next idea today.

In the previous part, we have laid the foundation to understand how the new Core infrastructure looks and getting an understanding of how it works. Today we’ll take a look at the arguably highest impact changes for package developers which make several improvements to the extensibility and testability of packages for Core.

#No special treatment for plugins

In Core 2.0 plugins were treated as a type of special entity inside the container. This is no longer the case in Core 3.0, everything that is bound to the container is treated the same and is just another binding.

Plugins now expose themselves to Core through “service providers”. In part 3 we explained what they do and how they are executed but the basic gist of them is to be isolated entities with a single responsibility, provide information about a plugin and ensure that it is properly registered, booted and disposed to avoid unwanted side-effects like ghost processes or hanging database connections after Core has already been stopped.

Most of the following has already been covered in Part 2 but lets quickly refresh our minds about service providers as they are at the heart of it all.

Service Providers contain 3 methods that control how a plugin interacts with Core while it starts. Those methods are register, boot and dispose which take care of registering bindings with the container, booting any services that were registered and finally disposing of those services when the Core process terminated.

A new feature that comes with the revamped plugin system of Core 3.0 is the ability to conditionally enable and disable plugins at runtime. Use-cases for this feature would be to enable or disable a plugin after a given height (similar to how milestones work), require some other plugins to be installed or require that a node has forked to perform some recovery tasks.

Let’s have a look at an example service provider that implements the enableWhen and disableWhen methods and break it down into pieces.

A common use-case for conditional enabling and disabling could be a plugin that fixes the state of a node if it forks and once new blocks are received it disables itself again.

Triggers are a new feature that will make it a lot easier for forks and bridgechains to modify how certain things behave without ever having to touch Core implementations, all your modifications will be done through your plugins that run in combination with the official stock Core available via @arkecosystem/core.

In simple terms, triggers are just functional bindings in the container that can be easily rebound by plugins to alter how Core performs specific tasks. An example of this would be how a block is validated, let’s have a look at what that would look like and how you could alter this behavior with your own plugin.

This very basic example illustrates how we can take advantage of triggers and hooks. If you would want to use your own implementation of block validation, all you have to do is to register a trigger with the same name and it will be overwritten and used by Core.

Since triggers are bound to the container like anything else in Core they are easy to work with in tests as you can simply bind them to a dummy container whenever you need to, without having to spin up a full application instance.

A big flaw of inheritance in the world of OOP is that it is limited to one level. This means you cannot extend more than a single class, which can get messy quickly as you end up with large classes that have multiple responsibilities.

Languages like PHP have something called Traits which works around this issue by allowing you to move methods into entities with a single responsibility. Those traits are easily reusable and could be things like HasComments or HasReviews which could be shared between entities like Movie, Project, Post without having to duplicate the implementation.

TypeScript has something called mixins. They act somewhat like traits, with the major difference being that under the hood they extend an object and return that. The result of that is that rather than simply adding some methods, a completely new object is created that contains the old and new methods.

Let’s break down the following example to understand how mixins inside of Core work and the pros and cons that come with them.

Mixins are a powerful tool to make use of composition over inheritance but they should be used with caution, like everything, or you’ll end up with the same issues that come with the excessive use of inheritance.

This concludes part 4 of the ARK Core Adventures series. In the next part, we will delve into how ARK Core 3.0 has made several improvements to internal testing and what new testing tools have come out of those.